O'Reilly Continues to Perpetuate the $16 per Muffin Lie

Bill O'Reilly loves to demagogue his audience on almost every issue. Be it, the President wanting to raise his taxes to a never suggested tax rate of "50 percent or more, which is very possible". Broad-brushing all liberals as socialists and even communists. Or, repeating lies of government cost of muffins, more on this later. What he almost never does though is give his audience the entire truth; but, this is exactly why his viewers love him...

His viewers do not wish to know President doesn't want to raise his taxes to over 50%, nor has ever proposed such tax rates, not once. Or that each muffin did not cost $16. Instead, his viewers hunger for someone like Bill O'Reilly to state falsities that support the absurd notion the government is rife with waste, corruption and completely over burdensome to corporations and citizens alike. "I understand working-class Americans" is one of O'Reilly's recurring lines. "I'm as lower-middle-class as they come" he boasts; but this isn't true either, is it Bill? Bill O'Reilly brings home roughly 6 million dollars each year. (According to Forbes, in 2006 , he earned a cool 9 million.) Which is great for him, but I think most Americans would agree this hardly constitutes belonging to the "lower-middle-class". He loves to have his audience believe "he is one of them", and "he fights for their interests". When both are far from reality after you lift the veil and sift through the lots of his spin-zone tales.

About the muffins... I've heard many people in my circles continue to perpetuate this lie (thanks Bill). Let us straighten this out once and for all. So how do we know it's a lie? Lawrence O'Donnell tells it best:

But this simply isn't true. So how do I know that the Department of Justice didn't pay $4,000 for 250 muffins? Simple. I read multiple reports that included statements from both the hotel and a DOJ spokesperson which clarified that much more was obtained by the DOJ for each $16 charge. I then politely asked the very same DOJ official, Public Affairs Deputy Director Gina Talamona, to email me an official version of this statement. I received that email with a document attached. The document included the DOJ seal on the top of the page, and it read in part: 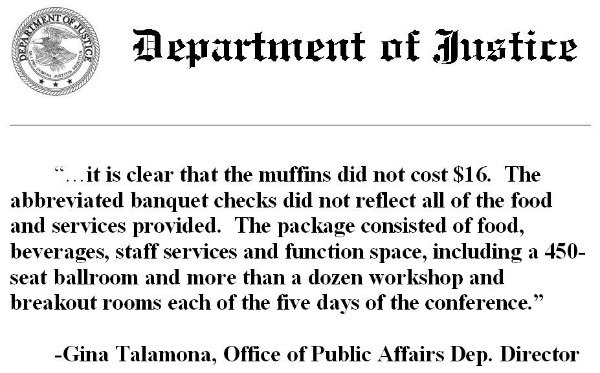 This is called research. It's a pretty big part of journalism. What's more, Bill O'Reilly would know the government didn't pay $4,000 for 250 muffins if he read his own network's website.

Read more of his comments about this on his blog: The Last Word - Lawrence O'Donnell