Recently on his show, Bill O'Reilly' expressed this about the Buffet Rule: "If the Buffet Rule is passed and millionaires have to pay more in taxes then they will invest less than they do now." This is the kind of misrepresentation of his opinion as fact is a primary example of why most FOX News viewers are more misinformed than other viewers of like networks. Where does Bill O'Reilly come up with this? Why would he make this up when he knows there is no proof of this? What could be his motivation? Perhaps he can convince his gullible audience to lower his taxes. After-all, that is what works best for him (even though it hurts the majority of his audience not to mention the US economy).

Time for the UN-distorted facts, from Bloomberg News:

Global investors overwhelmingly support President Barack Obama’s proposed tax increase for those earning annual incomes of $1 million or more in an effort to reduce the deficit.

Doesn't sound like investors want to back-off at all, instead they think this will encourage more investing from the uber wealthy. Wait, the story continues...

By a margin of 63 percent to 32 percent, respondents in a Bloomberg Global Poll approved of the president’s proposal, known as the "Buffett rule" in a nod to Warren Buffett, the chairman of Berkshire Hathaway Inc., who has said it is wrong that he pays a smaller share of his income in taxes than does his secretary.

Obama said Sept. 19 that making sure that the wealthy pay at least the same tax rate as the middle class was "just the right thing to do." House Speaker John Boehner accused the president of practicing "class warfare," saying any new tax would hurt job creation and Buffett’s situation was not typical.

Boehner pulls out the "class warfare" card, eh? That's is ironically funny when you look at the pay compensation gap between CEO's and average workers have grown over 400% since 1970. 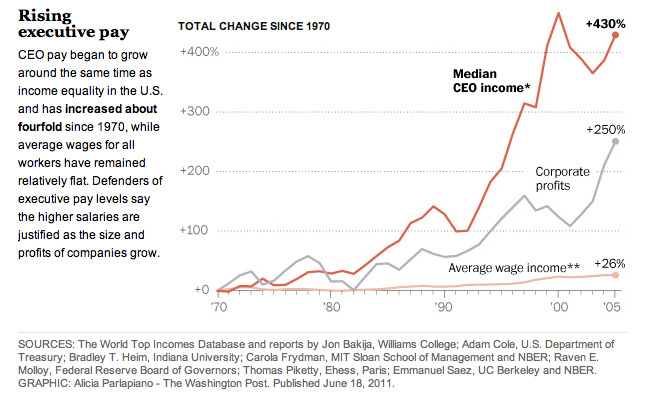 This in fact does seem like class warfare to me. Just not as Boehner describes it. Class warfare has been declared by the upper class decades ago. However, Boehner and his fellow Republican-Tea Party colleagues would love you to believe this tax increase would hurt the millionaires so much so they would rather close up shop than kick-in an extra few hundred thousand dollars to help our hurting economy and fellow Americans. Sounds very unpatriotic for the rich not to help the American economy recover.

Why are we having such issues here in American? Why does the average worker continually get screwed by its own company? Mr. Mellul explains his greed...

Lionel Mellul, co-founder of Momentum Trading Partners in New York, said he endorsed the idea of the rich paying more, while taking issue with the $1 million threshold. A New Yorker with a $1 million annual income is “far from really being rich,” he said.

The top 1% currently receive more than 50% of all income earned in the U.S., yet do not pay more than 50% of the Income taxes collected. This is huge indicator we have a tremendous greed problem among the richest Americans. And Bill O'Reilly wants your support with his.